Midsummer is the season for pike-perch trollers

The Vanaja watercourse fishing guide provides you with tips on where to fish for pike-perch and what kind of lures to use. For midsummer pike-perch trolling, you should head to Lake Vanajanselkä or the narrow waterway leading from Lake Kernaalanjärvi to Lepaa, for example. Lakes Mommilanjärvi and Pääjärvi are also great places for catching pike-perch.

Depth contour maps and sonar can help you find pike-perch even in unfamiliar lakes. The fish that pike-perch primarily prey on – smelt, perch and vendace – like to swim around near shallows and underwater cliffs, so these are areas where pike-perch congregate as well.

In the early summer, pike-perch stay in the vicinity of their spawning areas and are quick to bite at lures. Rocky shallows and fairly shallow inner bays are good places to look for early in the season. After the spawning season, pike-perch head to the open parts of lakes to hunt for vendace and smelt. Open lakes are usually at their best for pike-perch fishing in July, when the water temperature is highest

A regular cottage boat is good for pike-perch trolling

Equipping a boat for pike-perch trolling won’t cost you an arm and a leg. The traditional method is to troll by hand, which allows you to strike back immediately. You should tug your rod every now and then to produce a darting motion with the lure, making it more enticing. Using multiple rods requires the use of boat-mounted rod racks. Four rods is a good number even for beginners.

Experienced pike-perch trollers claim that catching large pike-perch requires slow trolling, while smaller ones can be caught even at faster speeds. In spite of this, you should base your trolling speed primarily on the lures used. Increase the speed of the boat slowly and check when the lures start swimming in a lively fashion – that’s when you’re going at the right speed. 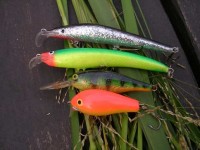 Size and colour are important for pike-perch lures

Size is one of the most important characteristics of a pike-perch lure. The fact is that pike-perch will not bite at excessively large lures. According to many fishers, twelve centimetres is the magic number when it comes to lure size.

Noteworthy pike-perch wobblers from the biggest brands include Jesse and Rapala’s Husky and Magnum lures. Other lures that have proven effective particularly in the Häme region and Eastern Finland include HK’s Varma and Merimetso, which are favoured by several competitive trollers. Experiment to find out what colours pike-perch will bite at and use same-coloured lures on all rods.