Cut the filleted pike into strips.

Place the strips in a freezing bag, for example, and add in some regular grilling marinade.

Let marinate in the refrigerator for a few hours.

Fry the strips and chow down.

Clean the roach thoroughly (scale them, remove all fins, the head and tail and wash the inside of the fish with a toothbrush, for example) and chop up into suitable portions.

You can supplement the basic recipe above with your own preferred ingredients, such as garlic, olives, capers, chilli, bacon.

Stack the fish portions into clean glass jars and spoon in the mixed seasonings, bay leaves, etc. so that each jar is 2/3 full. This will prevent the contents from gushing out during heating. Close the jar lids tight and place the jars on the grill of a cold oven. Set the oven temperature to 120 degrees and let stew for 4–5 hours depending on the size of the fish. Then set the oven temperature to zero and let the jars cool down slowly in the oven (this way the jars won’t crack open). Store the cooled down jars in the cellar or refrigerator.

Place the skinned burbot in one litre of boiling water. Add in a fish stock cube, ten peppercorns and a bay leaf and let boil until the fish is done (approximately 15 minutes). If you wish, add in the burbot’s liver so that it boils for approximately 10 minutes.

Lift out the fish and debone it thoroughly. Sweat a few chopped carrots, a diced onion and a piece of leek on a pan, add 6–8 chopped potatoes and then cook them in the stock. Once the vegetables are cooked, add in the chopped fish, liver, a few decilitres of cream and a dollop of butter. Bring to a boil and add salt if necessary. Garnish the soup with fresh dill, if you wish.

Chop up a few onions and cloves of garlic, half a leek and dice half a fennel, celery and some potatoes and a carrot. Sweat them in oil and add a few tablespoons of white wine vinegar. Add 8 dl of fish stock and a few decilitres of dry white wine (the rest go to the chef).

Let boil until the vegetables are nearly done. Garnish with salt and pepper. Then add the cream, 1 tin of crème fraîche and the deboned pike-perch pieces. Taste for salt. Once the fish is done, finish the soup with fresh basil and parsley. 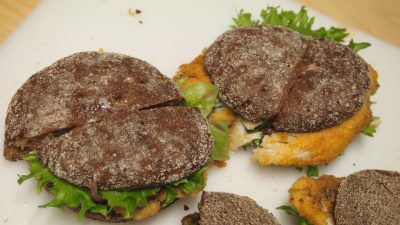 Dip the perch fillets in a mix of eggs, breadcrumbs and seasoning. Fry in plenty of oil in a deep pan for a few minutes.

Let the fresh onion rings marinate in red wine vinegar seasoned with sugar, salt and oil for at least a few hours. Toast the Reissumies slices in a toaster and assemble the burgers.

Put the skinned and deboned pike fillets in a blender and add salt.

Blend into an even paste.

Add the cream and crème fraîche as a narrow band. Shred in the peel of half a lemon and mix it into the paste. If you wish, you can also add in some chopped prawns or small pieces of pike-perch, herbs (such as shredded dill) and ground pepper.

Put the paste in a bowl and place in the refrigerator for a moment. In the meantime, cut the white bread into small cubes and place them in a dish.

Use a tablespoon to shape the fish paste into suitably sized balls and drop them in with the bread cubes. Roll and move the fish balls around gently so that the bread cubes stick evenly on to their surfaces.

Heat up a frying pan and add in the oil. Fry the breaded fish balls until they are a nice brown colour. At this point you can also flatten the balls to make them more steak-shaped. Once both surfaces are fried, add several dollops of butter into the pan. Let the steaks cook in the butter until done. If you wish, you can also cook the steaks in the oven by heating it to 180 degrees and cooking the steaks for 5–8 minutes.

Fry the fillets in a hot pan quickly, but make sure that they do not dry out too much. Spread a desired amount of stuffing on a fried fillet and top it off with another similarly sized fillet to make stuffed steaks.

Squeeze some lemon juice and shred some dill on top of the steaks. Serve with a side of potatoes and oven-baked root vegetables.

Looking for tips on what to make out of all the small fish you caught ice fishing? Last autumn, we asked fishers who carried out management fishing for tips on utilising small fish. Below are the recipes received from Elina Ignatius, which are originally from North Karelia.

This method will produce traditional crisps that preserve for a long time and are particularly popular among children. Small fish bones are not a problem either.

Peel and dice the potatoes and onion. Chop up the fish. Boil the potatoes, onion and barley groats in seasoned water until half done, then add in the fish. Let boil until done. Check the flavour.